Lin and I want to make sure that all of you know how thankful we are for the outpouring of appreciation and best wishes lavished on us last Thursday evening! It was a joy to serve Jesus by serving you for the past sixteen years. It is my wish for every pastor and his wife that you will be treated as well as we have been over these years.
We are especially thankful for the generous gifts given to us. Transitions are always difficult in some ways, but you have made our transition to FBC Atwood a very pleasant experience indeed.
Thank you and God bless you. Lin and I look forward to both fellowshipping and working with you in the future.
Posted by Lanny Faulkner at 9:14 AM No comments:

“All about Eve” starring Anne Baxter and Betty Davis won the Oscar for Best Movie of the Year!

“Rudolph the Red-Nosed Reindeer”, “Mona Lisa”, and “The Tennessee Waltz” were #1 hits on the radio and in record sales!

In 1950, the New York Yankees beat the Philadelphia Phillies 4 games to 0 in the World Series!

In June of 1950, President Harry Truman committed US troops to repel North Korea’s invasion of South Korea beginning our involvement in the Korean war which ultimately cost the lives of 36,940 US soldiers. Today, South Korea is (by percentage of population) one of the most Christian Nations on earth!

And, on Thursday, August 10th at 10am, Central Standard Time, “Moderator W.T. Waring (Pastor of Herald of Hope – now Pennsylvania Avenue – Baptist Church in Urbana) called the Association together after which the congregation sang, ‘Standing on the Promises’. Brother Avery Abbott led in the opening prayer. Elder Floyd W. Bandy (Pastor of Oakland Avenue – later, Lakeview Baptist in Decatur) led the devotions from Psalm 119:108 on the subject, ‘The Written Word.’”

Evangelist Hyman Appleman, who was conducting a city-wide crusade in Decatur at the time, preached the dedication sermon. An offering for the work was received in the amount of $130.98.

Happy Birthday CBA! We thank God for the hundreds of Pastors and their families; thousands of lay leaders; and tens of thousands of dedicated lay men and women who have prayed, given, and labored over the past sixty years to share the light of the gospel to the people of Central Illinois, North America, and the World -  and for all who continue to do so to this very day.

May our Association have many happy and fruitful years yet to come!
Posted by Lanny Faulkner at 8:27 AM No comments:

10 Years Ago Tonight... the Most Terrifying Night of My Life!

"This poor man cried, and the Lord heard him and saved him out of all his troubles.
The angel of the Lord encamps around those who fear him, and delivers them.
Oh, taste and see that the Lord is good! Blessed is the man who takes refuge in Him."
Psalm 34:6-8 (ESV)

I spent several scary nights in Viet Nam, and like most people I have had a few scary moments in my life; but, without any doubt, Friday Night, July 28th, 2000, was the most terrifying night of my life. The next morning, Saturday, July 29th, 2000, I would undergo surgery in my mouth and neck to remove three tumors due to my having been diagnosed with stage four oral and lymphatic cancer. It was the night before surgery, and I was very afraid.

Yes, I had been a Christian and a Minister for eighteen years. I had been to Bible College, Seminary, and Post-graduate School. I had taught others and was serving as your Associational Missionary, but I was very, very afraid.

I am writing this evening from a thankful heart for the last ten years that God has preserved my life and health. I thank Him for all of the joys and opportunities He has given me over this decade. I thank Him that I have come to a place of peace of heart and mind over this traumatic event.

Yes, there have been lots of tears and fears, and lots of terrifying nights since then. I was amazed at how often I had panic attacks and night terrors - always about believing that my cancer had returned. Well, it has not returned. Thank You, Jesus.

At prayer meeting this evening at Tabernacle I read the names of dozens of good and godly people who are struggling right now with cancer; and some them are (as was I) in stage four. As I pray for them this evening, I am testifying to the mercy of God in healing me and I am asking Him to heal them also. I hope you will join me in praying for them.

I want to thank so many of you who prayed for me then and over the years since. Only eternity will reveal how the Lord used the means of your prayers to work His grace in my life. Thanks and God bless you!

May our Lord grant the blessing of good health to all of our families, all of our friends, and all of our fellow church members. Grant it Lord, please; in Jesus' Name.
Posted by Lanny Faulkner at 6:41 PM No comments:

THE GREAT DEBATE - SPEAKING IN TONGUES

On Sunday, August 1, 2010 from 6:00 to 8:30pm, Tabernacle Baptist Church in Decatur will host a debate on the subject: The Gift of Speaking in Tongues. Dr. Wes Feltner, Senior Pastor of TBC will Moderate the Debate and the Guest Speakers include:

Everyone is welcome to attend. A love offering will be received to offset the cost of the event.
Posted by Lanny Faulkner at 2:26 PM No comments:

Whose Job is it to Win Illinois Anyway?

The Annual Meeting of the Southern Baptist Convention for 2010 is now history. The Great Commission Resurgence Task Force recommendations have been approved by the Messengers present and voting. Done. What now? While no one knows for sure, it would appear that with the exceptions of Chicago and (maybe) Metro St. Louis, we are going to be on our own to win the eight million lost people in our beloved State.

As NAMB is restructured and the partnership agreements are phased out, a larger and larger percentage of our missionary personnel and resources will be devoted to reaching the urban areas of our Nation. I suppose that mathematically this is the right thing to do.

The simple fact is Illinois is our Judea! Jesus sent “them” to evangelize “their” Judea; and "we" are going to have to evangelize "ours!" It is possible that having NAMB missionaries over the years has created an unhealthy dependency not unlike many church members who depend on their Pastor to carry out their Commission for them.

God bless these wonderful men and women who have served us and those who still serve us, but, the day is soon coming when we may no longer have them to carry out "our" commission for us!

The seven recommendations passed overwhelmingly. It is clearly what the majority of Southern Baptists want. Good thing? I don’t know. But I do know this… Illinois is OUR JUDEA! Beloved Ones, they’re out there, let’s go get them!
Posted by Lanny Faulkner at 9:10 PM No comments:

400th Anniversary of the KJV

2011 will mark the 400th Anniversary of the publishing of the King James Version of the Bible. This is an event that ought to be celebrated by every English-speaking Bible-believing Christian! In fact, we ought to celebrate for the entire year!

Mankind has received no greater gift than the Word of God; and the publishing of the King James Version in 1611 marked the beginning of an unprecedented spread of the gospel around the world! England and the Commonwealth would be used of God to bring His Word, and thereby His salvation, to millions of peoples around the world.

I do believe that God gave the King James Version at the birth of the world-wide dominance of the English language, (which continues to this day) to facilitate His will that His word be taken into all the world!

I do believe that the methodology of "word-by-word" translation from the original languages known as "complete equivalence" is still the right way to translate God's Word into new languages!

I do believe that the quality, beauty, and majesty of the language used in the King James Version is still unsurpassed in our day!

And, while I also believe that the changes in the uses and meanings of English words over the last 400 years require that the Word of God be continually updated into the language of ordinary English-speaking people today; I remain eternally grateful to God and the faithful translators of the King James Version of the Holy Bible for their labors and sacrifice to bring this gift to the world!

I intend to spend 2011 testifying to the grace of God by which He moved on the hearts of an English King and several godly Anglican and Puritan Churchmen to produce this treasure of divine instruction!

I intend to use it exclusively in my preaching and teaching throughout 2011 as a testimony to the grace of God that allows us to have the living Word of the living God in our native language.

Since more than 2,000 people groups on earth still do not have a single word of Scripture in their langauge, I intend to do what I can to support Wycliffe Translators, and others, who are giving their lives to bring the Word of God to them.

Yes, I still prefer newer translations; and, I still believe that the English Standard Version of 1991 is the most accurate and useful of all contemporary English translations; but, I also recognize the value of celebrating historical events of great consequence. No other event since 1611 has proved to have such a positive impact on the world and on God's work in the world than the publishing of the King James Version of the Holy Bible!
Posted by Lanny Faulkner at 9:07 AM 1 comment:

It is "Revival Time" in our churches! We hope you will attend as many of these meetings as your schedule will allow. We have been praying for revival in CBA; and here are some opportunities for you and your family to experience it:

April 23 to 25 @ Argenta! IBSA Evangelism Director Tim Sadler will be the guest speaker. Friday and Saturday will be at 7pm; Sunday will be at 6pm.

April 25-28 @ FBC Atwood! Bobby Boyles is the Guest Speaker.
Sunday is at 6pm; Monday to Wednesday is at 7pm.

May 2-5 @ Galilee Baptist Church! Lonnie Short is the Guest Speaker.

May 16-19 @ Forsyth Baptist Church! Don Whitt is the Guest Speaker.
Sunday is at 6pm; Monday to Wednesday is at 7pm.

If your church is having revival, please let me know and I will add your meetings to this list. God bless you and may the Lord bless CBA with sweeping revival this year!
Posted by Lanny Faulkner at 7:02 AM No comments: 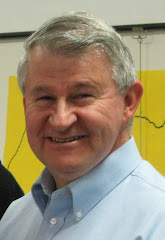 "Abide in me, and I in you. As the branch cannot bear fruit by itself, unless it abides in the vine, neither can you, unless you abide in me. I am the vine; you are the branches. Whoever abides in me and I in him, he it is that bears much fruit, for apart from me you can do nothing."